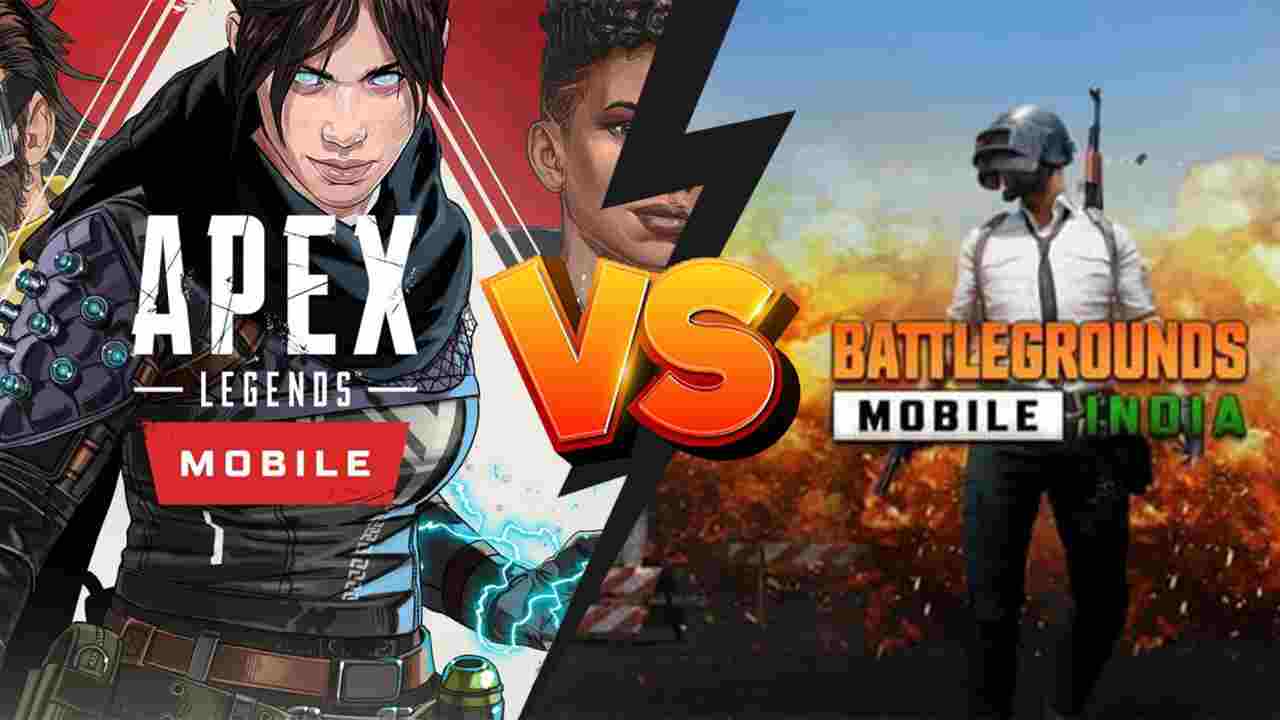 Apex Legends Mobile, the most anticipated Battle Royale game, has finally debuted globally on Android and iOS devices after a long wait, excitement, and multiple closed beta tests over the previous year. The release of Apex Legends Mobile in the gaming market has spurred debate about whether the game should be compared to BGMI.

To maximize their gaming experience, it becomes critical for gamers to know which game will deliver the finest gameplay, images, and audio. So, without further ado, let’s have a look at what both of these games have to offer in terms of everything a gamer requires.

You’ll be familiar with the premise if you’ve ever played Apex Legends on PC. Apex Legends’ primary concept remains the same on mobile, however, the game debuts with only one cloud map, World’s Edge. It involves 60 participants divided into three teams jumping off a landing ship and fighting to be the final team standing. The Apex Legends Mobile and Battlegrounds Mobile themes are significantly different. Apex Legends Mobile, which was recently published, is packed with action and features modern weapons.

BGMI, on the other hand, is based on a completely distinct idea. There are a total of 100 participants, each with a team of solo or 2-4 person squads battling it out to be the final team standing. On the other side, Battlegrounds Mobile India is a pretty realistic game. Weapons can be looted from less important facilities and buildings.

Legends are special characters in Apex Legends Mobile. Legends with unique skills that can be employed in battle royale matches are available to players. Multiplayer is a key component of Apex Legends Mobile, as everyone who has played it knows. To form a three-person team, the player must join forces with two other people. Then take part in Battle Royale bouts, which can contain up to 20 players (60 members).

Players in Battlegrounds Mobile India are not obliged to establish a party to participate in a battle royale match. Singles, duos, and four-player teams are available for mobile players. In Battlegrounds Mobile India, there are no characters with specific abilities. There are two basic characters, a male and a female, whose appearances can be customized according to the tastes of the players.

In Apex Legends Mobile’s main menu, there is a specific “Screen Settings” option that allows users to alter their graphical settings. Players can select from a variety of picture quality options, including smooth, balanced, HD, Ultra HD, HD, HD, HD, and original. The frame rate control settings can be changed between Balanced, High, Ultra, and Ultra High. The game’s liveliness is enhanced with the settings Adaptive Smoothing, Dynamic Shadow, Character Halo, and Anti-Aliasing.

Battlegrounds Mobile India’s creators have taken into mind that many players will be playing on low-cost handsets and have structured the game accordingly.

Smooth, Balanced, HD, HDR, and other visual settings are available to players. They can also choose from a variety of FPS options for their phone, including Low, Medium, High, Ultra, Extreme, and 90 FPS. The game’s general graphics settings (which include anti-aliasing and color blindness options) add to the fun. To enhance their gaming experience, players can even change the texture gradients.

Both games are excellent at their respective levels. On the one hand, BGMI has had a significant user base since its inception a year ago, and when it comes to Apex Legends, the number of pre-registration users has also surpassed millions. The games have vastly varied concepts and themes. In terms of graphics, both games have attempted to use better graphics to provide gamers with a more immersive experience.

Previous articleEuropean smartphone shipments fell 10% as Samsung, Xiaomi, and Oppo all saw declines in the first quarter of 2022
Next articleDrones are being used by Jio for tower surveillance and maintenance ahead of the 5G deployment