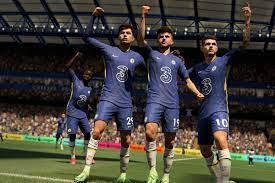 Through its very popular flagship series, FIFA, EA has been the dominant player in the gaming industry’s football arena. Earlier this year, EA informed the public that their licence agreement with FIFA was being reviewed and that the future title’s name might need to be changed. According to Tom Henderson of Xfire, EA has opted to call their upcoming instalment FIFA 23 for the time being, so players may celebrate for the time being.

With the FIFA 23 instalment, EA plans to make some major changes, and one of these adjustments has been generating a lot of buzzes. In the upcoming instalment, EA will provide cross-platform play for the first time. This move will bring players from various platforms together under the FIFA umbrella. This implies that fans will be able to play their favourite football game with their friends on other platforms such as Xbox One, PlayStation 5, and PC for the first time. FIFA players from all over the world have praised this new adjustment.

EA plans to make a few more adjustments to what could be their final FIFA-branded game. This includes an improvement to their Hypermotion technology, which will improve the realism of gaming and player motions. They were able to do it by recording real-time matches and using the information to improve the player animations and realism in the game. In comparison to the calibration suits they had been using earlier, this method offered the developers considerably more data.

Another in-game feature is the much-anticipated World Cup mode, which will be available for both men’s and women’s football teams. Players are still cautious of EA abandoning the FIFA name from its series, and future instalments may be dubbed ‘EA Sports FC.’ There have also been rumours that the next FIFA game will be free-to-play, although EA has not commented to confirm these rumours.