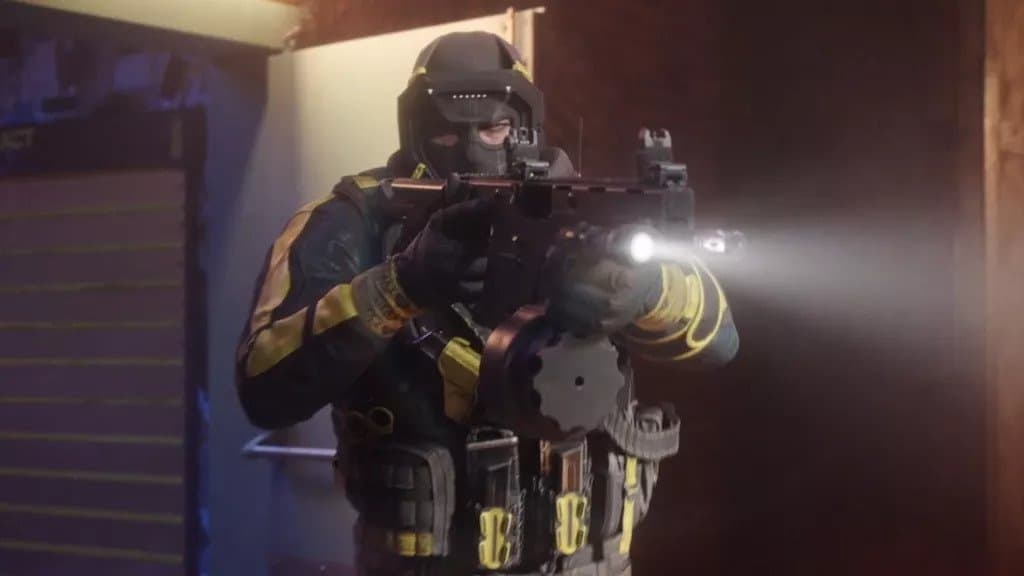 It’s a little tedious to sneak down every corridor, but if you want to avoid starting a horde with a startled Archaean, remaining low is the way to go. Enemies will gaze at you for a long time before “seeing” you from a crouched position, giving you time to score an easy headshot or simply walk on to another room.

Crouching is also advantageous when attempting to sneak up on foes like the Smasher and Tormenter for a melee takedown.

Almost always, scouring a fresh map and destroying every nest you can locate is a good idea. This not only clears a lot of Sprawl from the map, but it also prevents new Archaens from spawning if a huge conflict occurs. This isn’t simply for convenience’s sake; you’ll eventually notify an adversary, and leaving alerted nests unchecked is the quickest way to get killed.

Sledge’s hammer is wonderful, and Pulse’s scanner is useful for identifying nests, but when going into a higher-level task, you should emphasise healing gadgets. For instant survivability, Doc and Rook are excellent choices. When Finka is enhanced, she may also recover some health over time, however, her health enhancements only last a few seconds.

You can duplicate the benefits of these health-oriented operators with secondary gadget slots, depending on which ones you don’t accept. It’s usually a good idea to wear body armour if there’s no Rook around. If Finka isn’t available, it’s a good idea to have a self-revive kit on hand.

Even if you’ve alerted every adversary in the area and are being blasted from every direction, there’s still a possibility to slip back into stealth. Never be afraid to flee a tense situation. Hunker down in a room and assess what’s still after you after you’ve placed some distance between yourself and the horde. You can take off a few Grunts or Spikers with a few headshots and return to relative stealth if it’s just a few Grunts or Spikers. The catch is that returning to stealth does not turn off irritated nests, so foes will continue to spawn.

Several times over your Extraction career, the nest situation may most likely become out of hand. Aggravated nests will continue to extend Sprawl and produce new foes indefinitely (at least that’s what I’ve noticed). When a swarm of nests has gone unobserved for a few minutes and generated far more opponents than a few operators can handle at once, this can be disastrous.

Green nests are commonly grouped in groups of nine or ten, and a single Archaean scream can set them all off. After wiping out my squad multiple times, I learnt that in these situations, it’s best to just leave, either through the airlock or by exiting the operation entirely. You’re not going to be able to demolish every nest and hold F on the epicentre without being ripped to bits by 30 aliens, so take the XP hit and avoid losing the operator.

Extraction’s grenades are mostly stunned grenades in different flavours. You can use Glue to slow Archeans down, a flash to confuse them in position, or a frag to destroy them, but I’ve yet to come across a grenade as handy as the Impact. It can not only rip a hole in a wall for speedy escapes, but it can also clear large areas of Sprawl ooze, destroy nests, and stun adversaries long enough to perform a melee takedown from behind.

There’s a reason why every pistol in Extraction that can employ a suppressor comes with one by default. You’ll be glad you had a silenced gun on 99 per cent of runs to secretly shoot nests and unknowing attackers without alerting the entire complex. Although removing the suppressor increases damage and recoil, most adversaries can be destroyed with a single shot at a weak place, so you’re not missing out on anything.

The lower two settings in Extraction may get very easy after you get the knack of sneaking around and headshotting grunts. Jumping up to Severe or Critical can be intimidating, but with skilled teammates and a little coordination, you can survive anything. The game is designed to be played at these higher levels—until you play on Severe, you won’t even encounter every enemy type in the game. It’s also worthwhile because of the additional XP. After one successful run, you’ll easily level up an operator numerous times after you reach Severe.

When you play Extraction solo, it scales in a variety of ways. Not only do solo players receive a free 50 health boost at the start of a run, but the objectives are also changed to make them more manageable for one person. A sole operator, for example, just has to protect one planted bomb, plant trackers in three nests instead of five, or stealth take out one Archaean instead of three.

MIA operator rescues are by far the oddest mission change. There are fewer tentacles to fend off when playing solo, and they spawn very near to the caught operator. This makes pulling the MIA operator for a second, stepping off, and shooting every exposed tentacle node a breeze.

Previous article
Here’s the list of the top 10 Best-Selling Games On Steam Last Week
Next article
Sony gave us the treat of Uncharted: Legacy of Thieves Collection trailer