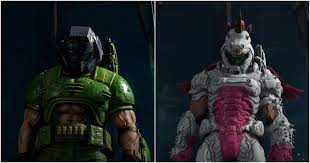 Fortnite rumoured to get the Doom Slayer skin

According to a new Fortnite rumor, one of the most iconic video game characters of all time will be joining the popular battle royale game soon. The Doom Slayer, from Bethesda’s DOOM franchise, is the character in question.

While no other information about the Doom Slayer skin has been released, it is said to be one of many Xbox Game Studios-related skins that will be arriving at Fortnite in the future.

The Xbox Podcast is the source of this new Fortnite rumor featuring the Doom Slayer. Nick Baker, the show’s presenter, mentioned in the most recent episode that he has heard that Xbox is aiming to partner with Fortnite considerably more in the future.

While Baker didn’t reveal all of the Xbox-related skins he’s heard about for the game, he did indicate that the Doom Slayer is one he’s heard is on the way. Baker went on to clarify that he doesn’t know when this skin will be released in Fortnite, especially because it will most likely require specific licensing agreements, but he expects it will happen at some point in the future.

Given how many well-known video game characters have made appearances in Fortnite in recent years, Doom Slayer’s addition seems only natural. Not to mention, Xbox, which now controls the character’s rights, has previously demonstrated its willingness to work closely with Epic Games on Fortnite.

Xbox has previously added skins to the battle royale game for characters like Master Chief from Halo and Marcus Fenix from Gears of War. As a result, it appears as the two organizations will only look to collaborate more as time passes.