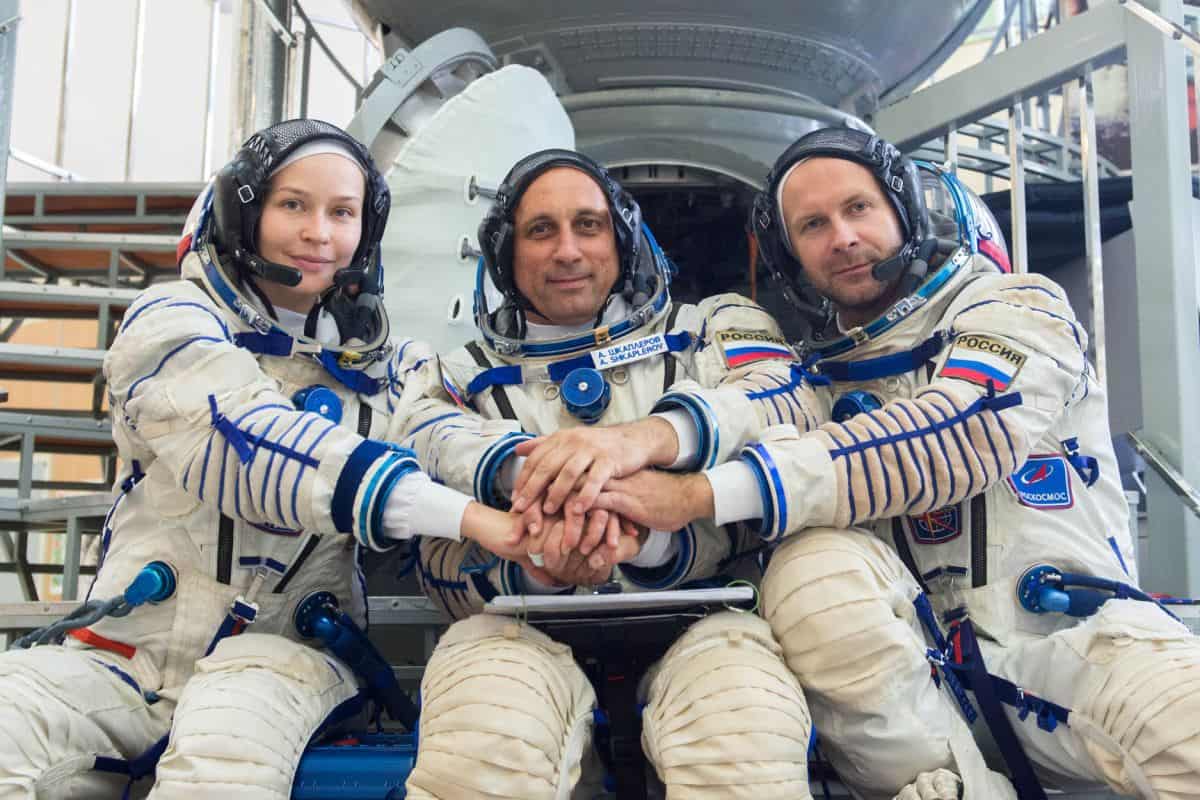 Russia is all set to launch an actor and a film director who will feature the film into space in orbit, for the first time in history. It is a project of the nation’s space chief that has hailed a chance to raise the prestige of Russia’s space program. On Tuesday, Actor Yulia Peresild and director Klim Shipenko are all set to blast off for the International Space Station in a Russian Soyuz spacecraft together with cosmonaut Anton Shkaplerov, a veteran of three space missions. It has come to know that after 12 days on the space outpost, Peresild and Shipenko will return to Earth with another Russian cosmonaut.

A new movie is all set to film segments named Challenge planned by the crew. It is about a surgeon summoned to rush to the space station in order to save a crew member who suffers a heart condition.

While talking at a news conference at the Russian launch facility in Baikonur, Kazakhstan, Peresild has acknowledged that the training for the mission was very exhausting but he has also described it as a once-in-a-lifetime opportunity.

She has said, “It’s a miracle, an incredible chance”.

“We worked really hard and we are really tired, even though we stay in good spirits and smile,” the 37-year-old actor confided. “It was psychologically, physically, and morally hard. But I think that once we achieve the goal, all that will seem not so difficult and we will remember it with a smile.”

Pereslid has said that it was very difficult for her to adapt to the strict discipline and severe demands are required during the training.

Peresild said it was difficult for her to adapt to the strict discipline and rigorous demands during the training.

She has said, “Here on Baikonur, we made friends with everyone and all people warmed up”. She has further told, “But it was quite difficult in the beginning when you aren’t given much choice: Just go, run, go faster, hold on, carry on. It wasn’t easy for us and it was quite unexpected, but we have gone through it.”

She has also said that it was a very challenging part of the preparation for the flight and also learning about the design and handling of the spacecraft.

She has said, “It didn’t come easy for me, to be honest”. Further added by her, “For the first two weeks, I was learning it until 4 in the morning every night. There are so many acronyms, and if you don’t learn them all you won’t understand anything else further on.”

The most liked part of the training by Peresild was a flight imitating weightlessness, in which a plane goes into a steep dive to allow those insides about 20 seconds in zero gravity. She further added that she has also realized that zero gravity in orbit could be completely different and is gearing up for her first morning in orbit.

She said, “Some mornings could be difficult, even on Earth”. She has also told, “We thought a lot about it, and cosmonauts shared some life hacks.”

Shipenko, 38, has made several commercially successful movies which include Kholop (Serf), a 2019 movie that has set a Russian box office record. He has also described the training as tough.

He said, “Of course, we couldn’t make many things at the first try, and sometimes even at a third attempt, but it’s normal”.

Salyut-7 is one of Shipenko’s previous films, it told us the real story of a challenging 1985 mission of two Soviet cosmonauts sent to resuscitate an abandoned space station.

The four-month training course is very intensive as described by him, he has also added that it has made them prepare better as they did not turn him and Peresild into professional astronauts.

Shipenko is very much thrilled to be the first filmmaker in space and also said that he is very much eager to experiment with lighting, camera settings, and other technical aspects. Once on the space station, Shipenko said he will don a T-shirt that he always wears when he begins to shoot a new movie.

The entertainment-world crewmates were insisted by Shkaplerov and are fully ready for the flight after their fast-track training.

He said, “No one had that experience before: to prepare people who had no relation whatsoever to the space program for a space flight”. He further added that it could be useful for the urgency that arises and send an outside expert into orbit.

The head of the Russian state space corporation Roscosmos named Dmitry Rogozin was a key driving force behind the project. He further described that making the world’s first feature film in space will lead to raising the chance of Nation’s space prestige.

He said, “Movies long have become a powerful instrument of propaganda” in June, arguing that the new film would help counter what he described as Western efforts to “humiliate” the Russian space program.

Some Russian media were skeptical about the plan and there were reportedly some doubts inside the Russian space program as well.

Six space flights are made by a highly decorated veteran of the Soviet and Russian space programs named Sergei Krikalev. He was fired from his post as director of Roscosmo’s crewed missions in June following what some Russian media described as his sharp criticism of the filmmaking project.

A few days later, Krikalev was insisted on the director’s job, apparently due to the intervention by his highly-placed backers. He has refrained from public comments on the project.

The Russian segment of the International Space Station is considerably less spacious compared to the US segment, leaving little room for filmmaking. It was expanded in July after the long-awaited arrival of the new lab module, the Nauka, which is yet to be fully integrated into the station.

Filmmaking plans are sketchy, but Shipenko said that Shkaplerov, Novitskiy, and Dubrov will all play parts in a new movie. Novitskiy, who is set to star as the ailing cosmonaut in the film, will take the captain’s seat in a Soyuz capsule to take the crew back to Earth on Oct. 17.

Previous article
Liverpool Looking Forward to Sign Premier League Star Adama Traore, who Might be Saying “yes” to the Transfer
Next article
Xavi to Demand five new signings if he becomes the upcoming Barcelona Coach