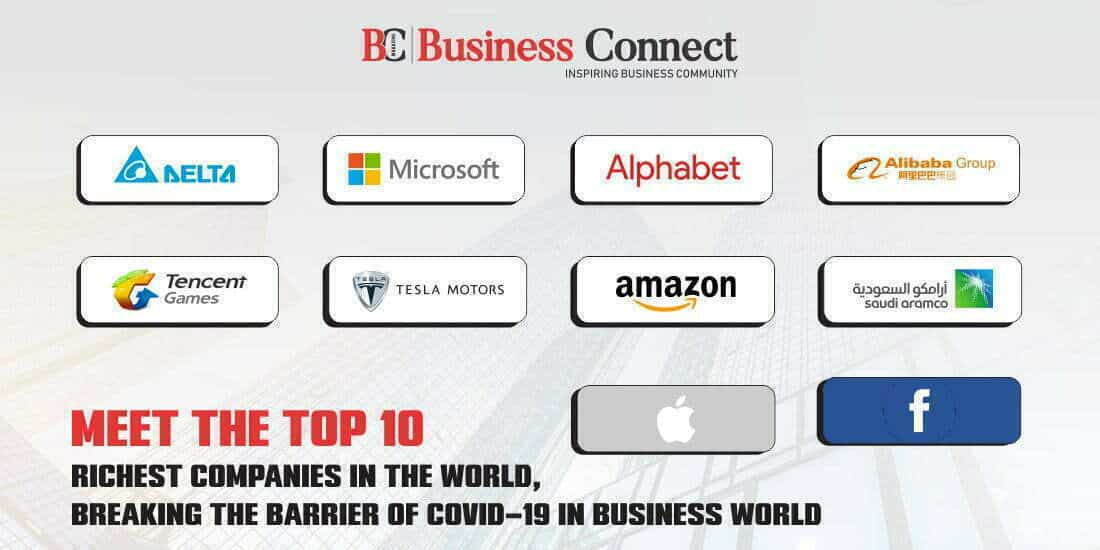 It is quite interesting to know about the richest company in the world. If you assume that all tech companies will fill the list then you may be wrong as Saudi Aramco has become top in the list which is a single network hydrocarbon company and they also produce liquid gas.

Here is the list of the Top 10 richest companies in the world:

This company was founded by Jack Ma and his 17 friends founded Alibaba.com, this time Alibaba Group has become one of the largest names in the retailers and e-commerce Companies in 2020 and the 5th largest AI company as well. It also has provided business-consumer and business services along with web portals, electronic payment services. It also provides a search system for customers and cloud computing.

Tencent mainly provides a service portal that includes a value to the internet, telecom, mobile, and also online advertising services. Now, this company is one of the leading internet companies in the world having total revenue of 37,730 crores CNY in 2019, and also has increased by 20% compared to the last year. The headquarter of Tencent Seafront Towers is situated in Nanshan District, Shenzhen. Tencent also offers many services like social networks, smartphones, mobile games, music, web portals, payment systems, e-commerce, Internet services.

This time Facebook is one of the most popular applications which have millions and millions of users. It was established in 2004 by Mark Zuckerberg along with his talented classmate of Harvard University in early 2004. This is mainly a social media platform to communicate with more than 2 billion daily users and a market value of $757 Billion shows the popularity of Facebook.

Tesla, Inc. is one of the popular Automobile companies which was founded in 2003 by a group of engineers today the company not only makes electric vehicles but also provides acceleration to the world’s transition to sustainable energy and make storage products as well. Elon Musk is the chief executive of this company. It is reported that the company sales rose about 36 percent to 499,550 cars in 2020.

Alphabet. Inc. is a multinational top most American company which has the headquarter in Califonia, it was made through the restructuring of Google that makes the company a popular and better organized. The name was changed by Google in 2015  to Alphabet.

Delta Electronics (Thailand) is mainly a famous manufacturing company for electronic products that have included many power supplies, industrial and construction automation systems, infrastructure for alternative energy, electric transport, and many electronic products. The company also has planned to for investing $20 million US Dollars (Bt630 million) to $40 million globally and in which half of the funds will transfer to Thailand.

In America, Amazon is one of the top multinational companies, it is informed that the company Iis mainly focuses on various types of services like e-commerce, cloud computing, digital streaming, and artificial intelligence. In 2019 It become the most expensive company in the world and still growing with 1.3 million employees.

The entire world knows the name of the company Microsoft which is mainly a software development company of America with headquarters in Washington, it was founded in 1975 by Bill Gates. Microsoft is mainly providing the services like developing, manufactures, licenses supports, and sells computer software.

It is one of the topmost companies with uniqueness and along with all the places like a traffic signal, railway station, market places, daily numerous people buy Steve Jobs book and read it as well, Steve Jobs is undoubtedly a famous charismatic pioneer in the era of the personal computer. He has founded Apple who is recently the most successful brand and one step forward in technology. It is mainly a multinational technology company to develop and sell an electronic product.

Saudi Aramco is currently one of the largest companies in the world in collecting revenue, it is the oil company of Saudi Arabia that operates the world’s largest hydrocarbon single network. Saudi Aramco has become the main leader in producing liquefied natural gas. The company has been recently purchased by the government of Saudi Arabia.