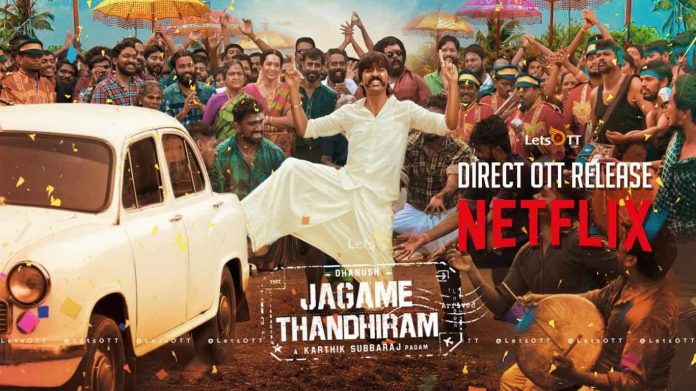 Jagame Thandiram is an action-thriller-based Tamil movie. It is directed by Karthik Subbaraj and produced by S.Sashikanth, Chakravarthy, and Ramachandra from the Production house of YNOT Studios and Reliance Entertainment. It will be released on an OTT Platform named Netflix. The running time of the movie is 2 hrs and 37 mins.

It is a story of a Tamil gangster working with the global mafia of London, as he is conflicted between being allies with them as revolting against them.

Jagame Thandiram has released on Netflix on 18th June 2021. It will release in the Tamil language along with dubbed versions in Telugu, Malayalam, Kannada, and Hindi.

The initial part of the movie shows us the quick-witted Suruli who use his streetsmart ways to track Sivadoss. It is the film’s most interesting bits. Its quirky tone makes it more interesting. But in the second half, the whole tone changes and it seems that we have been dropped into a different universe. We even set a flashback but how Subbaraj uses the struggle of Eelam Tamils to add depth, but somehow, the attempt doesn’t make the scenes moving. As a whole, the movie is quirky but underwhelming. Some moments are fresh but the pattern of the movie is familiar, no such new innovations have been seen.

Natalia Winkelman from New York Times says that some moments feel fresh, but the movie’s patterns are familiar: scheme, slaughter, repeat. Shubhra Gupta from The Indian Express said that it is just about serviceable. While Haricharan Pudipeddi from The Hindustan Times said that Karthik Subbaraj tried to pull a Kabali with Dhanush but he disappoints big time with his new film. The Times of India’s M Suganth says that the result is as interesting as Spaghetti cooked in Salna.