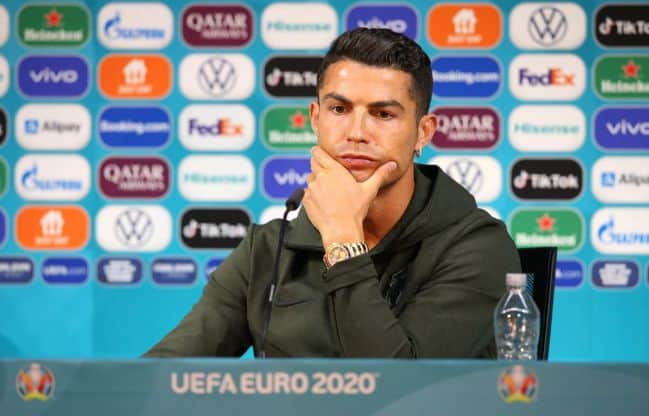 Cristiano Ronaldo speaks about his future before Euro 2020

Cristiano Ronaldo’s future has been up in the air for quite some time now. He has been criticised for Juventus’ poor season despite winning the Serie A Golden Boot.

There have been many rumours about Ronaldo wanting to return to his old club Manchester United. Some reports even suggest United have offered him a two-year contract.

Cristiano said during the press conference when asked about the rumours affecting him, via Marca: I’ve been playing at the highest level for 18 years, that doesn’t even bother me,”

“Whatever happens, it will be for the best. Regardless of whether I stay [at Juventus] or leave, that’s not the most important thing at the moment.”

“I’m focused on my national team, because you don’t play a competition of this magnitude every day. It’s my fifth European Championship, but in my mind it’s as if it’s my first.”

Read: Cristiano Ronaldo removing Coca-Cola bottles from the Euro 2020 press conference has resulted in a loss of $4 million for the company

Cristiano Ronaldo is currently with the Portugal national team playing in the Euro 2020. Portugal are the defending champions, having won the Euro 2016. Ronaldo was asked about Euro 20167 Portugal team and the current Portugal team.

“Only the competition will tell if we are better or worse than in 2016. On a personal level, I’m not the same player that I was ten years ago.”

Cristiano Ronaldo also commented on his longevity at the highest level is remarkable and he puts it down to the way in which he has evolved as a player with age.

He said: “The players who last the longest in football are the ones who are best able to adapt to the changing circumstances,”

Previous articleCristiano Ronaldo removing Coca-Cola bottles from the Euro 2020 press conference has resulted in a loss of $4 million for the company
Next articleBell Bottom: Everything you need to know about its release date and cast