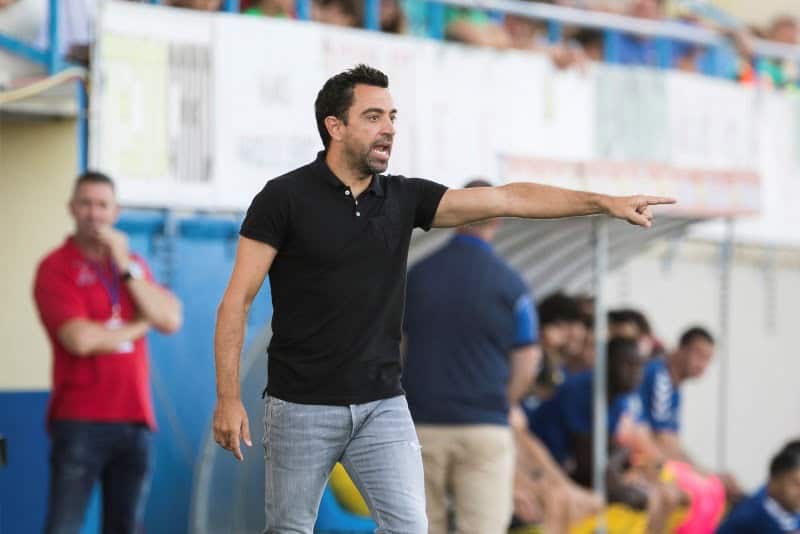 Barcelona legend Xavi Hernandez has been one of the frontrunners for the Barcelona job ever since he has stepped into the managerial field. The 41-year-old made 767 appearances for Barcelona during his playing days.

The current Al Sadd boss has revealed that he has not received a phone call about replacing Ronald Koeman.

Xavi said at the presentation of the Xavi Hernandez Campus in Barcelona, via Marca: “I’m always on the market. I’ve been coach for two years and I have a very good relationship with [Barcelona president Joan] Laporta,”

“He decides, I have not been able to talk to him. They have decided to stick with Koeman and I wish him all the best.

“Whatever he has decided, I imagine it will be the best for the club. I’m always aware of what Barcelona are doing, I’m still very invested in the club, but in these three or four months I haven’t had any contact with anyone on the board.”

Despite lots of rumours about Xavi one day becoming Barcelona head coach, he is in no rush.

“I don’t know when that moment will come. I’m on the market, but I’m not in a hurry,” he noted.

“It’s a dream and an ambition of mine. I couldn’t imagine having two offers to come back, and they arrived [both during Josep Maria Bartomeu’s presidency].”

“I try to be ready for when Barcelona or another club arrives. I’m ready, but I’m not in a hurry. I hope that everything will come to fruition.”

Xavi told Messi: “I think he will stay, but it’s his word and his decision,”

“He has earned the right to decide, he is the best player in Barcelona’s history. I hope, as a Barcelona fan, that he will stay.”

“He makes the difference in 0.1 seconds. It would be an enormous privilege [to coach him].”

Xavi replied on going to the Premier League: “Why not? Everyone speaks well of it,”

“There’s even more respect for the professionals.”

Xavi also talked about the Spain job: “I am open to any offer,”

“I see myself more at a club, I like the day to day [work]. But I don’t see it as the end of my career; Luis Enrique is not at the end.”

Previous articleEuro 2020: Spain has 17 players on standby in the parallel bubble squad for COVID-19 emergencies
Next articleOFFICIAL: Georginio Wijnaldum joins Paris Saint-Germain till 2024