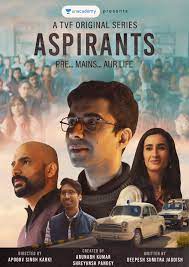 The Viral Fever, abbreviated as TVF, has recently released a new web series called Aspirants, which has gained huge public response and become hyped in the social media platform.

Recently, a new controversy has come across that Sahitya Akademi Award-winning writer Nilotpal Mrinal has made allegations of plagiarism against TVF for copying the soul of the story of his book name the Dark Horse, written by him in 2015. He accused TVF of creating the series Aspirants by copying about 30% of its book soul story and making 100% out of it.

TVF has presented a series called Aspirants where they showed the audience the life of UPSC aspirants staying at old Rajender Nagar, Delhi and also shows the realistic view of life and its struggle. The season finale was released on 8th May 2021. Aspirants stars Naveen Kasturia, Shivankit Singh Parihar, Abhilash Thapliyal, Namita Dubey, and Sunny Hinduja in pivotal roles.

Nilotpal Mrinal added, “I watched Aspirants when it released, and I realized from the first episode that the content for the series has been stolen from my book. After watching all the five episodes of the series, I was sure that the makers of Aspirants have stolen the soul of my book to make the web series.”

The writer further added, “I had prepared for UPSC and my book Dark Horse is based on that experience. It is the same book for which I received my first Sahitya Akademi Award. Therefore, the story is extremely close to my heart.”

Nilotpal has posted on Facebook a photo of Arunabh Kumar and wrote, “Have shared Arunabh’s photo and details of the meeting with him to prove that he knew me as the writer of Dark Horse and was also aware of my interests to make a film based on the book.”

Mrinal has also written on the post that he is going to take legal actions against TVF for copying from his book and also not giving him credit.

The author has also shared that he earlier had a meeting with TVF’s Arunabh Kumar and suggested him for creating a movie and web series based on his book Dark Horse. He also said that the meeting went well and Arunabh ha liked his idea. According to him, “30 percent of Aspirants is based on his book, but that was not a concern for the people sitting in Mumbai.”

Nilotpal Mrinal has shown his devastating attitude regarding law and order of India. He said that there is no strict law present in India for plagiarism. So, in India, many of the writers have lost their cases. It’s very heartbreaking when someone takes the soul of the story and develops it into a series or movie without giving any credit or mentioning the names. It is making the writer’s community a loser, who writes a book and create a story it’s like a child for them. It is a feeling of taking a child away from their mother.

The writer with a heart full of sorrow also shared that, “People must have thought writers like Nilotpal come and go every day. Recently Satya Vyas’s Banaras Talkies was also stolen, what could these people do?”

Mrinal further said, “I’ll fight for Dark Horse if I lose it will be the loss of Dark Horse’s writer, but if I win, it will be a win for every struggling writer whose stolen stories have turned into hit films/ web series.”

TVF’s reaction against the accusation

After hearing about these controversies regarding the plagiarism which Nilotpal charged, TVF has also given their own response against it. They said, ” “TVF is a creator-centric organization which has been nurturing writers since inception and takes their rights very seriously. A social media post has alleged that our show ‘Aspirants’ has been inspired by another literary work. The Company has received a notice in this regard, and we will fully cooperate to investigate the matter,” the statement read.