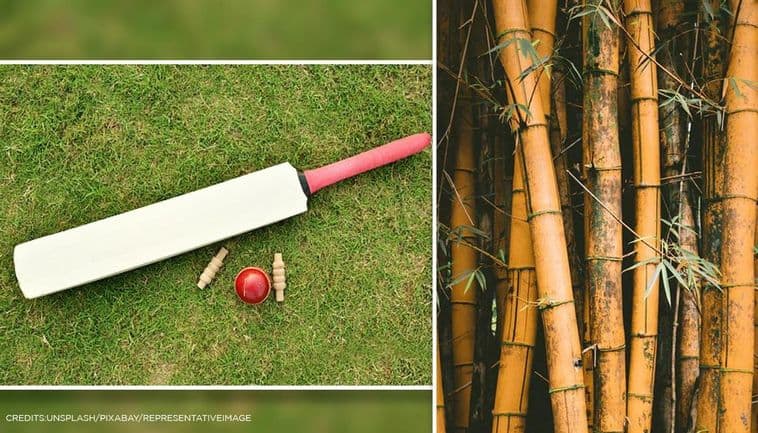 A cricket bat is a specially equipped wooden piece used by the batsmen in the sport of cricket to hit the ball. The length of the bat does not exceed more than 38 inches (965 mm), and the width also does not exceed more than 4.25 inches (108 mm). The bat is traditionally made from willow wood which is very light in weight and tough enough to shock-resistant the throwing ball.

Earlier, the bats were made from heartwood willow, which is a lot heavier, but in modern days the manufacturers use sapwood of the English willow to make cricket bats lighter in nature and help the bats move freely while making a shot.

For ages, cricket has been a game of willow with principles guiding between bat and ball in the frontline. The Cambridge University has found that the bat made of bamboo is 22% stiffer than willow and the bat moves faster to fly off the ball. It is also cheaper to produce and this automatically leads to grow cricket in the poorer part of the countries.

The Cambridge study states that the bamboo bat had a “better sweet spot” than that of willow. The cricket bat made of bamboo is the future of cricket. The sound of leather on bamboo represents the most perfect example of quality and class. Dr. Darshil shah of Cambridge’s Center for Natural Material Innovation, who is a former member of Thailand’s under-19 national cricket team, said: ” This is a batman’s dream. The sweet pod on a bamboo bat makes it much easier to hit a four off a yorker for starters, but it’s exciting for all kinds of strokes. We’d just need to adjust our technique to make the most of it, and the bat’s design requires a little optimization too”.

Ben Tinkler-Davies and Dr. Darshil Shah compared the performance of both willow and bamboo bats. “Cricket brings you really close to nature, you spend hours out in the field, but I think the sport can do a lot more for the environment by promoting sustainability. We’ve identified a golden opportunity to achieve that while also helping lower-income countries to produce bats at lower cost,” Tinkler-Davies said. The sweet spot was 20mm wide and 40 mm long, larger than a willow, which takes up to 15 years to mature.

According to Marylebone Cricket Club (MCC) “The blade shall consist solely of wood” but the new innovation is all about bamboo but “Bamboo is a grass, not a wood”, said Dr. Darshil Shah of Cambridge Center for Natural Material Innovation. So, the MCC needs to sit for a meeting to conclude a decision. “But we think playing with a bamboo bat would be within the spirit of the game because it’s a plant-based material, and a cane, a type of grass, is already used in the handle.”