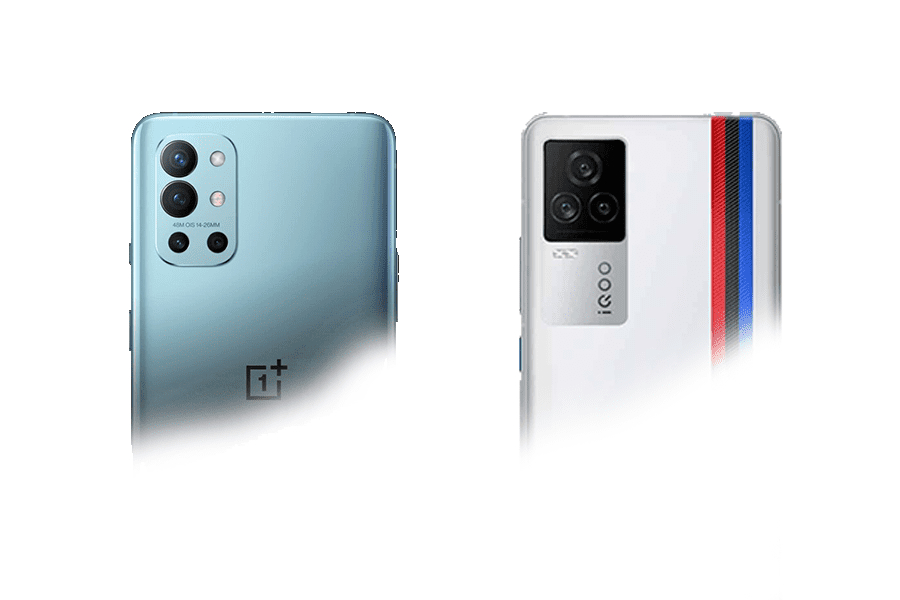 OnePlus has already launched the OnePlus 9 series including the OnePlus 9R in India at Rs.39,999 for the base variant. On the other hand iQOO is just teasing the launch of the iQOO 7 in India and in the last tweet made by iQOO India it becomes totally clear that the upcoming smartphone powered by Snapdragon 888 SoC will be iQOO 7 and it ill be priced under Rs.39,990. This clearly will create a confusion among the people of India that at almost the same price which one will be a better choice?

So in order to answer that we are here to focus on every aspects and tell you which one will be the best, and if you think Snapdragon 888 SoC powered phone under Rs.40,000 will definitely be the one then you might be mistaken because there are few more aspects other than a processor in a premium smartphone now.

Now coming to the camera section, iQOO 7 has a primary 48MP Sony IMX598 sensor with Optical Image Stabilization along with a 13MP Portrait and 13MP (UW) sensors at the back. While the front-facing camera is 16MP. Whereas, OnePlus 9R offers a quad rear camera setup including a 48MP f/1.75 Sony IMX586 main lens, 16MP Sony IMX481 sensor, 2MP monochrome and a 5MP macro sensor. For selfies and video chats, the OnePlus 9R offers you a 16MP Sony IMX471 selfie shooter. This time OnePlus has partnered with Hasselblad for its image colour optimization and to deliver never before colour accuracy for every image the OnePlus 9 series click. Here OnePlus 9R gets an upper hand.

The display sizes are almost similar and AMOLED panels are present in both devices. Both of them has a 120Hz display refresh rate, thus making both of them the king of modern-day smartphone display. These factors other than the processor are the main aspects of a smartphone. But wait we still are not forgetting about the battery capacity of both the devices. The OnePlus 9R has a 4,500mAh battery and comes with the Warp Charge 65T support which is a 65W charger, while the iQOO 7 will come with a decent 4,000mAH battery and we know that the Chinese version of the phone supports a massive 120W fast charging. So this might also be the case when the phone will launch in India will also support the same 120W fast charging.

So, we think if you want something more powerful and with decent photography skills then wait for the iQOO 7 but if you are totally into photography and can pass on the best spec then OnePlus 9R should be your priority. After all, both devices are capable of handling heavy and powerful tasks but the difference becomes prominent when and how you handle it.

The launch date of iQOO 7 is yet to be announced officially. Whereas, the first sale of the OnePlus 9R will start on April 14. Buy OnePlus 9R 5G: Click Here

Previous article
boAt Airdopes 621 with massive 150 hours backup to launch on 26th March
Next article
What to expect from Xiaomi’s launch event on March 29?